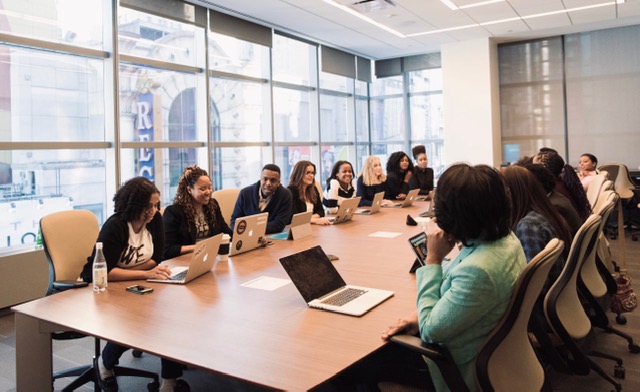 We previously blogged about the benefits of diverse and inclusive leadership at board and senior leadership level. This month we’re going to shine a light on and examine how far organisations have come in terms of women holding board positions and what work there’s still to do.

100+ years ago during the war effort, the proportion of women in employment rose from 24% in 1914, to 37% in 1918. ‘Women undertook jobs normally carried out by men and proved they could do the work just as well.’ – UK Parliament

It was a historic time and one would hope that a century later, women would have equal or close to equal representation in work, including at the top level – but this is sadly not the case.

Yes, great strides have been made (especially in the last 20 years), but the number of women in power still isn’t representative. Let’s examine the facts . . .

Such was the success of the Davies Review that the Hampton-Alexander Review (2016-2020) continued its work and again made great gains for female representation at board level:

These gains are great achievements, but it’s not gender parity & there are limitations. For example, whilst the number of women on boards has increased, women still only hold ‘14% of executive directorships in the FTSE 100’. This contributes to the gender pay gap because as the Hampton-Alexander Review explains, ‘executive positions carry far higher pay than non-executive directors.’

The Pipeline, Women Count 2020 report found that, ‘women enter finance in large numbers, but few make it to CFO. This year just 16% of CFOs are women, with men taking 84% of these roles.’

What we need is not just more women on boards, but more women occupying the executive positions of Chief Executive Officers, Chief Operating Officers, and Chief Financial Officers.

In 2020 The Pipeline found that, ‘the financial year closed with more FTSE 100 CEOs named ‘Peter’ than women in these roles’. As Margaret McDonagh and Lorna Fitzsimons, Co-founders of Pipeline state: “In any age, let alone in the third decade of the 21st century, and during a Covid-19 economic crisis, this position is scandalous.”

With the pandemic disproportionately affecting women’s careers, we also run the risk of not just losing the momentum we have gained in the last decade, but losing some of the gender gains we have achieved, both in the general workforce and at board level.

The pandemic has been devastating for the economy and having diverse boards, with women on boards helps companies financially. The Pipeline report found that, ‘FTSE 350 companies with no women on their executive committees have a net profit margin of 1.5%, whereas those with more than 33% women at this level reached an impressive 15.2% net profit margin . . . The UK economy and shareholders have missed out on an additional £47 billion in pre-tax profit, enough money to keep the NHS running for a full 5 months.’ Or as HR Magazine explains, ‘It pays to have more women on the board.’

What of charities? How do their trustee boards look in terms of female representation?

A report commissioned by The Charity Commission, GOV.UK in 2017 found:

Inclusive Boards’ 2018 report which examined the diversity of boards and senior leadership teams in the sector found that charities are ‘lagging behind the private sector in relation to leadership at board level,’ and that ‘only 2.9% of trustees and 2.5% of senior leaders within the sector were women of colour’.

Why might this be? NCVO discusses how, ‘the problem, of board diversity, is exacerbated by the fact that 81% of charities recruit for trustees by word of mouth or personal recommendation.’

“There is no room for complacency about the state of trusteeship. Trustees do not reflect the communities charities serve. Charities are therefore at risk of missing out on the widest range of skills, experience and perspective at board level – indeed trustees themselves report lacking key skill areas, including digital.” – Helen Stephenson, Chief Executive, The Charity Commission.

If you work in the charity sector, what’s the diversity of your board like? With the added financial pressures the pandemic has brought, the squeezing of funding from government, councils, donations drying up etc, can you afford not to diversify your board?

The job of an MP is to represent the interests of their constituents. In order to have fair policies, it’s vital we have a diverse parliament and government, where our leaders and representatives mirror that of society.

In 2021 a research briefing was posted by the UK Parliament, House of Commons Library, entitled ‘Women in Politics and and Public Life’. It found the representation of women to be similar to that of the corporate and charitable sectors:

‘In both politics and public life in the UK, women have historically been underrepresented. In recent years, their proportion has increased, although in most cases men remain overrepresented, especially in more senior positions.’

The research briefing states, ‘There are 220 women MPs in the House of Commons’ and ‘at 34%, this is an all-time high.’

However as 50:50 Parliament (an organisation working towards an inclusive gender-balanced parliament) documents: ‘In the 100 or so years since women could first stand for Parliament over 5000 MPs have been elected but only 552 have been women.’

When we look at the top level of government – the cabinet, we can see that, ‘of the 23 members of the cabinet, six are women.’ – Institute for Government.

How can our government lead and solve the problems our country faces; when we are not fully utilising the diverse talents that are available? Unfortunately this situation is not unique to UK politics. Much the same can be said for women in power globally. UN Women (2021) summarises:

Different countries have different approaches to the problem of female representation. In 2015, Canada’s Prime Minister, Justin Trudeau made world news when he appointed 15 women and 15 men to his cabinet, stating, “It’s important to be here before you today to present to Canada a cabinet that looks like Canada.” – The Guardian.

The battle for gender parity in the workforce and for women to be represented at board and SLT level continues. Below are some comments and recommendations from the reviews and reports detailed in this blog, as to how companies can achieve this:

“We must continue our focus on gender and look at the true diversity of those leading our business. In order to remain relevant to our clients and communities we need leaders who come from a wide range of backgrounds, each bringing different skills and views to the table, creating boardrooms that truly mirror our society. Without these different outlooks and diversity of skills and experiences, our businesses will simply not thrive in this fast paced changing competitive world.” – Melanie Richards, Vice Chairman, KPMG in the UK, Davies Review.

“To succeed in getting more women into senior leadership roles, you need to have a healthy pipeline of female talent running right through an organisation. That means identifying and removing barriers at every stage which prevent women from making progress in their careers.” – Rt Hon Theresa May MP, Former Prime Minister of the UK, Pipeline, Women Count 2020

‘How can you increase diversity? Set limits for trustee teams. Use alternative methods of recruitment. Enlist people with life experience related to your charitable cause. Advertise trustee vacancies using specialist job boards. Recruit people with a range of skills. Organise board meetings that are accessible and convenient for all. Establish positive working relationships. Encourage inclusive and accessible decision making. Inclusive chairing.’ – NCVO

“There are many businesses making huge strides with their female leadership but too few women hold senior leadership positions and executive roles on Boards. We must focus on creating a stronger pipeline to these positions and getting more women onto these pathways… we have to go beyond the numbers and remove the barriers that under-represented groups face throughout their careers.” – Mary O’Connor, Acting Senior Partner, KPMG, Hampton-Alexander Review

“Companies should as a matter of best practice have a woman in at least one of the 4 roles of Chair, CEO, SID and CFO, and investors should support such best practice.” – Sir Philip Hampton, Hampton-Alexander Review

“We have fallen short on representation in Executive Committees . . . As we reflect on progress, we know that we cannot be satisfied until we can say that unconscious bias is no longer an impediment to the development of women leaders and that all leadership teams reflect and utilise all of the talent available.” Andy Duff, on behalf of the Steering Group, Hampton-Alexander Review

If your organisation would like support in reducing Unconscious Bias in the workplace, to benefit from Diverse and Inclusive workforces and Inclusive Leadership, check out our training packages for more information.

Jemma is one of our associates at Enact Solutions. If you enjoyed this blog, check out her piece ‘Inclusive board, inclusive culture‘ for more content on this topic. 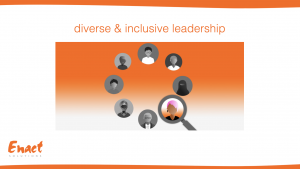 We know that many organisations realise the value that diverse and inclusive workforces bring (see our D&I business-case blog) and many companies are doing brilliant, innovative work in this area. However to what extent does this extend upwards SLTs and board level members?

Whether you work in the corporate or charity sector, having board members and trustees that come from a range of backgrounds, with different experiences and skillsets is vital for the success and longevity of your organisation.

Sitting on a board is a serious responsibility, not least in the time we find ourselves in. Responsible for the long-term prosperity of an organisation, board members strategise to fulfil their organisations’ mission statements and ensure companies are being effectively run. The pandemic has been extremely challenging for businesses and navigating the path forwards will require great leadership. Board diversity is key for this.

The status quo and make-up of most boards is that of the older, white male. Let me be clear – that doesn’t mean these board members don’t add tremendous value; that they aren’t extremely well-intentioned, incredibly skilled and experienced. However without diversity of perspective to inform decision-making, and with many biases being unconscious, having just one type / group of people in charge, can result in exclusive practices and lost opportunities for enhanced business growth.

We need to encourage applications from and facilitate more women, ethnic minorities, people from socially diverse backgrounds, people with disabilities, LGBTQ+ people, and other minority and marginalised groups onto our boards and into senior leadership positions.

Take young people for example. ‘Less than 3% of charity trustees are under 30.’ The Young Trustees Movement are an organisation which ‘exist to double the number of trustees aged 30 and under on charity boards by 2024,’ because they recognise that, ‘intergenerational perspectives enable better decision making.’

Young people make great board members because they’re fresh out of education and have up-to-date sector knowledge. They’ve learnt the latest innovative approaches, have an insight into what consumers of their age want and an eagerness and enthusiasm to learn and contribute.

Consider as well the gender, ethnicity, disability, LGBTQ+ pay gaps we have . . .

Is it any wonder these exist, when we don’t have a balance of different types of people in leadership positions? Representation is how we utilise the collective expertise we all have to offer, make fairer practises, unlock hidden markets and drive business growth.

If you’d like to learn more about inclusive leadership and inclusive recruitment, check out the work we offer at Enact Solutions. We can tailor our training programmes to focus on diverse and inclusive Senior Leadership Teams and / or Boards. Drop us a line at 01484 310234 or info@enactsolutions.com and let’s talk about your needs.

Jemma is one of our associates at Enact Solutions. For more specialised reading on this topic, check out her blog post, ‘Tackling underrepresentation of women at board & senior leadership level‘.