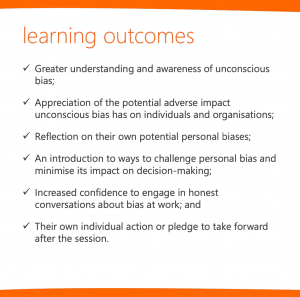 Last month unconscious bias made the news again after KPMG’s UK Chair, Bill Michael said in a zoom meeting to hundreds of employees that he thought unconscious bias was “complete crap”. – Financial Times.

In a recording of the virtual meeting which was leaked online, we hear Michael say: “I think unconscious bias is complete crap, complete and utter crap . . . There is no such thing as unconscious bias, I don’t buy it. Because after every single unconscious bias training that has ever been done, nothing’s ever improved.” – YouTube.

Shocked at his comments, some KPMG staff shared their thoughts anonymously via an app during the meeting. One employee wrote, “There’s no such thing as unconscious bias?! Are you joking? Please do your research before just making such statements. Check your privilege.”

In addition, when discussing the impact of the pandemic on employee lives, Michael said, “You can’t play the role of victim unless you’re sick . . . don’t sit there and moan about it”. Perhaps unsurprisingly, Michael no longer works at KPMG(!). After apologising to staff first verbally and then via email, he stepped aside from his role when KPMG launched an independent investigation, before resigning shortly afterwards.

Whilst the above occurrence, is not the focus of this blog, Michael’s inaccurate supposition that ‘nothing’s ever improved’ after unconscious bias training is what I want to talk about today.

It’s such a fascinating statement because it points to the classic misunderstanding people have around the ‘effectiveness’ of unconscious bias training:

The expectation that training will result in automatic behaviour change (a reduction of unconscious bias and discrimination in the workplace). And when this doesn’t happen, people can become disillusioned, disparage training and write the topic off as a whole (as evidenced above).

This is highly problematic because it stops organisations seeing what the training does achieve – awareness raising; and how important this is in the process of working towards behaviour change. It is often the first step and the foundation upon which all subsequent work in this area is built on.

Ask yourself: How can people change their bias-based behaviours, if they’re not aware of them? . . . If they’re not aware of how potentially harmful they can be, to both individuals and organisations as a whole? They can’t, can they?! You have to have knowledge of a problem in order to take steps to do something about it; in order to facilitate positive behavioural change.

So how do we solve the disconnect of people or organisations misunderstanding what unconscious bias training can achieve? The answer is learning outcomes! Both training providers and clients need to be clear on what the learning outcomes of any training will be.

‘So what types of learning outcomes can employers expect from quality training providers?’, I hear you ask. To answer this, I’ll be looking to Enact Solutions and their unconscious bias training programme. The reason for this is that Enact Solutions have successfully delivered unconscious bias training to thousands of employees since 2013 and they have an excellent reputation because of the quality of their training. They use drama-based, experiential learning which is extremely creative, interactive, with business-relevant content.

I’ve also personally attended Enact Solutions’ unconscious bias training, can attest to the quality of it and seen other individuals and organisations take part in and be similarly enlightened by it. I was genuinely blown away by it, from the expert facilitation, to the use of characters and the interactive content. The training was so powerful and raised mine and other employees’ awareness and understanding of what a complex phenomenon unconscious bias is and the adverse impacts it can have on people and organisations.

For the purposes of this exercise, I’m going to use an evaluative report from an unconscious bias workshop Enact Solutions ran last year, which is representative of their training as a whole on this topic. The workshop in question, was delivered to a group of of directors and senior managers totalling 22 people. The training was highly interactive, blended multimedia digital material, anonymous polls and group discussions with excellent facilitation. Participants filled in an online feedback form after the training, and then a follow-up survey six weeks later to further evaluate the legacy of the training.

✓  Appreciation of the potential adverse impact unconscious bias has on individuals and organisations.

✓  Reflection on their own potential personal biases.

✓  An introduction to ways to challenge personal bias and minimise its impact on decision-making.

✓  Increased confidence to engage in honest conversations about bias at work.

✓  Their own individual action or pledge to take forward after the session.

As you can see the learning outcomes do not overpromise what the training can achieve; there are no unrealistic expectations that the training will eliminate unconscious bias in the company and that the workforce and senior leadership positions will be representative of society. That behaviour change work will come later for an organisation.

This unconscious bias training is about the first step of the process: raising awareness and understanding; of why unconscious bias exists, its potential impacts, self-reflection, ways to converse about, challenge and minimise bias. It is not about rushing the process, but about the steps that need to be taken first, to begin the journey. It is about creating the foundation from which change will be built on.

In the follow-up survey (6 weeks later):

As you can see, the results speak for themselves as to how effective the training is in terms of raising staff awareness. 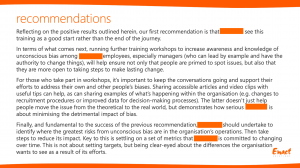 Within the evaluative report, Enact Solutions created a section entitled ‘Recommendations’ (a set of suggestions if you will), for the company going forwards, post training. I particularly like this addition, because it highlights Enact Solutions’ passion for the organisation to continue their journey on this topic, even after their training responsibilities have been delivered.

The recommendations re-enforce that the training is a, ‘start rather than the end of the journey.’ It identifies that further training for employees and managers, ‘who can lead by example and have the authority to change things,’ can be a next step.

It states, ‘it’s important to keep the conversations going’, so that participants can reflect on their own and others’ biases and details that one useful way of doing this is through the sharing of informative articles and videos.

Furthermore, the report delineates the more complex, behavioural change part of the process: ‘Identify where the greatest risks from unconscious bias are in the organisation’s operations,’ and ‘then take steps to reduce its impact’. The recommendations explain that it is, ‘not about setting targets’, but being clear on, ‘the differences the organisation wants to see as a result of its efforts,’ and deciding on a, ‘set of metrics’, that the organisation is committed to changing over time.

The report details that any changes to procedures and processes should be shared within the organisation, thus ‘help[ing] people move the issue from the theoretical to the real world.’

‘Is unconscious bias training effective?’ – this was the title and question posed in this two-part blog series. Part 1 evidenced it is effective for raising awareness (see BIT report and meta-analysis). Part 2 then looked at a representative case study of Enact Solutions’ unconscious bias training and similarly confirmed and showed how powerful training is in raising awareness.

So why is this important in the wider world?

What significance does it bear?

And why must organisations take heed of this information?

In a world which has so much inequality and inequity (something the events of 2020-21 have brought into sharper focus and raised public levels of understanding on) and with biases considered the root of discriminatory behaviours, for organisations to not raise awareness about this subject is unacceptable and says something very significant:

It says they are accepting of and allowing these biased-based behaviours to continue.

We know that biases can adversely impact areas such as recruitment, promotion, allocation of work and staff development (for more info see this blog). We know biases can negatively affect employee well-being, productivity, inclusion and retention. There is clearly a legal, moral and financial business case for addressing the complex phenomenon that is unconscious bias. And unconscious bias training, which is effective for raising awareness, is the first step in that very exciting and important journey.

This is the second in a two-part series of blog posts about the ‘effectiveness’ of unconscious bias training, written by Jemma Houghton, one of our Associates at Enact Solutions. Check out Part 1 here.

One thought on “Is unconscious bias training effective? . . . Part 2”