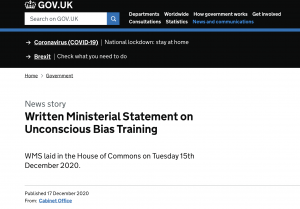 In December 2020 the UK Government published a ‘Written Ministerial Statement on Unconscious Bias Training‘, in which it ‘concluded that unconscious bias training does not achieve its intended aims,’ would ‘be phased out in the Civil Service,’ and ‘encourage[d] other public sector employers to do likewise.’

The announcement sent shock waves across the news, training providers and businesses. My own reaction on first reading, was one of disbelief and confusion. I’ve attended unconscious bias training, continued my reading on the subject and found the learning incredibly invaluable. The more I learn, the more it confirms how vital unconscious bias training is for businesses and their employees.

As HR Magazine explains: ‘The point of unconscious bias training is to make us aware of the implicit biases we all carry . . . reduce and ultimately eliminate discriminatory behaviours of the sort laid out in the Equality Act 2010.’

With discriminatory behaviour costing the UK economy £127 billion in lost output each year (Public Finance, 2018), unconscious bias is a term every business and staff member needs to understand. It impacts decision-making in areas such as recruitment, pay, allocation of work, staff development and promotion. It results in less diverse workforces, lower returns and affects employee wellbeing.

So why would the Cabinet Office issue such a strong, startling and stark statement against unconscious bias training?

Well, it comes as a result of a report by the Behavioural Insights Team (BIT – which interestingly is partly owned by the UK Cabinet Office), who were commissioned by the Government Equalities Office, ‘for a summary of the evidence on unconscious bias and diversity training’. The BIT report states, ‘there is currently no evidence that this training changes behaviour or improves workplace in terms of representation of women, ethnic minorities or other minority groups in position of leadership or reducing pay inequalities.’

Before unconscious bias training is relegated, cast aside and simply left for dead(!), let’s pause and take a moment. As with anything, we must review all of the information (the statement, report, meta-analysis etc) to try to understand why and how this conclusion could have come into being and assess the validity of it.

The Written Ministerial Statement has been the subject of much conversation amongst experts in the field and on analysis has been criticised for a number of reasons. There are many points we could discuss, however for the sake of brevity, I’ll focus on just a few. On reading the BIT report we discover important information which the Written Ministerial Statement worryingly does not reference or explain:

For example the BIT report states: ‘The evidence for UBT’s ability effectively to change behaviour is limited. Most of the evidence reviewed did not use valid measures of behaviour change.’

This means that unconscious bias training has not been found to not change behaviour, but that the measures used in most of the studies were not considered scientifically rigorous enough to determine that.

The Written Ministerial Statement also makes no reference to the section in the BIT report entitled: ‘Limitations of the evidence base’, which identifies (amongst others) the following issues:

Why are the variations in design important? Well, as the BIT report states: ‘This makes it difficult to pool data and to identify whether a particular strategy does in fact work better than another.’ For example training variations included face-to-face, e-learning, lecture-style, interactive, mandatory, voluntary, one-off sessions and ongoing training. Different types of training yield different results. The variations speak to the quality of the training; and as with all training, quality is key.

The report also noted that that the participants were ‘disproportionately students (82%)’, as opposed to employees in work-based settings and so it is, ‘inadvisable to generalise findings to the general population’. For the government to make the conclusion it made, based on a report from a meta-analysis, where such large numbers of the participants were not of the relevant target group, in the relevant setting or country (over-representation of US-based studies) is really quite staggering. As the BIT report summarises (but again the Written Ministerial Statement makes no mention of): ‘There is a need for robust, repeated behavioural studies of UBT interventions in UK workplaces before the field can reach consensus on what definitely works and what does not.’

The thing that concerns me most though is the notion made by the Cabinet Office that if unconscious bias training does not change behaviour, then it is simply ineffective and should be abandoned. This belief is simplistic, limiting and ill-conceived, as it doesn’t take into consideration the complexities of unconscious bias, how training is one step of a much larger process and the potential benefits this process can ultimately go on to achieve. Here’s why . . .

Anyone who has any understanding of unconscious bias knows that these unintentional stereotypes and people preferences are formed as a result of a lifetime of experiences and media exposure. They therefore and understandably take time, education, practise etc to dismantle.

Obviously the ultimate goal is for workplaces to root out bias-based behaviours, reduce and eliminate discriminatory practises, so that organisations are diverse and fairly representative of society, both within the general workforce and in leadership positions (eg representation of women, ethnic minorities, people with disabilities, people with caring responsibilities etc).

So what can unconscious bias training do? Well, what the BIT report does find is that, ‘UBT is effective for awareness raising’, when using, ‘advanced training designs such as interactive workshops or longer term programmes to reflectively reduce biases,’ and ‘UBT can be effective for reducing implicit bias’.

And this is where the process starts.

We start by learning what unconscious bias is, why it happens and the dangers of it. We raise our awareness. We acknowledge we all have unconscious biases. We reflect on our own and we start to recognise how they influence our and others’ behaviours. We look at our workplace practices. We examine where unconscious bias can creep in and we change our policies accordingly. We review, we evaluate, we continue to make changes. And all of this takes time, happens over time and is an ongoing process.

It is unacceptable that the Written Ministerial Statement places no value or understanding of this.

Experts have also criticised the Written Ministerial Statement because as HR Magazine says, ‘no ulterior plans to tackle workplace discrimination seem to have been put in place’, despite the government claiming to be, ‘determined to eliminate discrimination in the workplace’. Lucille Thirlby from the FDA civil servant’s union asked what the scrapped unconscious bias training was going to be replaced with because: “How will they ensure people are not discriminated against?” – BBC News. It’s an important question, which for now, continues to go unanswered.

Amongst the online discussion, is Frank Starling’s piece for Forbes entitled: ‘Why UK Ministers Should Rethink Their Decision To End Unconscious Bias Training’. His writing beautifully and expertly details the value of unconscious bias training within a larger process. He identifies it as a tool which helps to raises awareness so that future conversations and work can be done to mitigate the negative impacts of unconscious bias.

He says: ‘Without a nuanced look at how unconscious bias training works in conjunction with other D&I tools, and without a proposed alternative, the announcement sets a bad example . . . scrapping a single tool because it is deemed ineffective on its own is shortsighted. You need a variety of tools to tackle a complex task . . . Unconscious bias training is one approach to starting conversations around the biases we all hold, that can hold us back.’

He goes on to say: ‘Unconscious bias training sparks a conversation and raises awareness, but it cannot dismantle centuries of structural racism, ableism and sexism. So what can? A multi-faceted and collaborative approach . . . The organisations that understand the complexity of dismantling structural oppression will require a complex set of tools are the ones moving in the right direction.’

So, in summary, when we try to answer the question, ‘Is unconscious bias training effective,’ when considering if it removes workplace inequality and discrimination caused by unconscious biases? The short answer, as the government found, is of course not.

However, the longer, more pertinent answer, when we understand that unconscious bias training is an integral part of a much longer process and as evidenced by this blog is yes . . . Yes it is effective, because it’s the first step in that journey and one which needs to be taken.

This is the first in a two-part series of blog posts about the ‘effectiveness’ of unconscious bias training, written by Jemma Houghton, one of our Associates at Enact Solutions. Check out Part 2: Examining unconscious bias learning outcomes here.

One thought on “Is unconscious bias training effective? . . . Part 1”