If you’ve been involved in one of our Dignity and Respect workshops about bullying, harassment, incivility and microaggressions in the workplace this ‘handout’ page summarises some key points. It also signposts other content if you are interested to find out more on the subject.

getting on the same page

If you found yourself in the most respectful working environment you can think of, what would you see or hear? How would you know it was respectful?

Consider your answers to these questions, then think how you would rate your actual working environment?

What if you checked with your teammates? Do you think they would share your outlook? No doubt they would on some things, but probably not everything.

Starting a conversation about respectful behaviours at work helps people get on the same page. It’s not woke, or a tick box exercise, it’s the only way to understand different people’s sensitivities and boundaries at work, and it helps work out things like acceptable levels of banter, so people know where to draw the line.

’What do you see and hear around you at work?’

Dr. Chester M. Pierce coined the phrase microaggression in 1970 to describe insults and dismissals regularly inflicted on African Americans. Derald Wing Sue Ph.D. proposed a classification of racial microaggressions in 2007 and popularised use of the term for marginalised groups.

“Microaggressions are the everyday verbal, non-verbal, and environmental slights, snubs, or insults, whether intentional or unintentional, which communicate hostile, derogatory, or negative messages to target persons based solely upon their marginalised group membership.”

Micro-assaults: When a person intentionally behaves in a discriminatory way while not intending to be offensive. An example of a micro-assault is a person continually implying that any sexuality other than heterosexuality is ‘abnormal’

Micro-insults: A comment or action that is unintentionally discriminatory. For example, this could be a person saying something like, “You’re an inspiration” to someone belonging to a protected characteristic, who is in a senior leadership position.

Micro-invalidations: When a person’s comment invalidates or undermines the experiences of a group of people. An example of a micro-invalidation would be a white person telling a black person ‘Racism doesn’t exist today.’

Lynne Andersson, Christine M. Pearson, and Christine Porath are popularisers of the concept of workplace incivility.

“Workplace incivility is low-intensity deviant behaviour with ambiguous intent to harm the target, in violation of workplace norms for mutual respect. Uncivil behaviours are characteristically rude and discourteous, displaying a lack of regard for others.”

“Workplace incivility is rampant and on the rise. The accumulation of thoughtless actions that leave employees feeling disrespected—intentionally ignored, undermined by colleagues, or publicly belittled by an insensitive manager—can create lasting damage that should worry every organisation.”

Here are some examples of everyday incivility:

Cyber: Incivility through technology, e.g. sending blunt emails, copying someone in to a vast email chain, emailing/ texting out of hours.

Victimless: In reality not victimless, however named as such because it involves acts that are perceived as not being directed at an individual or specific group, e.g. not taking out bins, washing up, cleaning toilets/ general space, etc.

Some of these things may seem small, but they feed into the prevailing workplace culture. In time, when nothing is done about the ‘small things’ other more serious infractions, like bullying, harassment or victimisation, will follow.

As the saying has it, ‘there are three sides to every story, yours, mine and the truth.’ In our sessions, we describe this as the ‘3 worlds‘. When dealing with the topic of dignity and respect, you could describe it like this:

To bring this to life, we use dramatised scenes where the same situation is presented twice, with subtle tonal differences. This powerful exercise demonstrates perspectives and the power of assumptions.

It’s worth noting that sometimes when we present this model, some people think we are saying that a ‘victim’ should change their perspective to feel better. We’re not. The point is that every interaction between two people involves perspectives and assumptions. Failing to grasp this, especially under pressure or when the stakes are high, makes it less likely we will communicate effectively and respectfully, and increases the likelihood we will end up in conflict. Seeking to understand the other person’s perspective may not be easy to do, but it can lead to a resolution.

banter vs bullying– where is the line?

Nowadays, we might call it ‘bantz’, but banter or ‘just having a laugh’ is as old as the hills. It’s often good-natured fun, a harmless part of the everyday team experience that makes working life bearable. Sometimes, though, the difference between banter and bullying isn’t as clear as it might be, and things gets said or done that cross the line.

“I thought you were watching your weight.”

Where would you instinctively place this on the line between bullying and banter?

“I thought you were watching your weight.”

Is this banter or bullying? Why?

What if you knew the person reaching for the snack bar had made two complaints to their manager in the last month about their colleague making frequent ‘snide’ remarks regarding their weight?

Alternatively, what would you think if you found out that the person making the comment had been asked by their colleague to intervene if they see them snacking, as they are trying to watch their weight?

Different factors influence our opinions and the way we feel when we experience or witness exchanges like this one at work. Also, consider whether banter/ bullying is defined by the people involved or if we also need to think about the experience of bystanders in the workplace.

Factors influencing our opinions and the way we feel:

Bullying may be characterised as:

Offensive, intimidating, malicious or insulting behaviour, an abuse or misuse of power through means that undermine, humiliate, denigrate or injure the recipient.

Harassment as defined in the Equality Act 2010:

Unwanted conduct related to a relevant protected characteristic, which has the purpose or effect of violating an individual’s dignity or creating an intimidating, hostile, degrading, humiliating or offensive environment for that individual.

Victimisation as defined by gov.uk:

Victimisation broadly refers to bad treatment directed towards someone who has made or is believed to have made or supported a complaint under the Equality Act.
It includes situations where a complaint hasn’t yet been made but someone is victimised because it’s suspected they might make one.

what you can do

If you’re being bullied or harassed at work, UK Government guidance says, before making a formal complaint:

“Employees should see if they can sort out the problem informally first. If they cannot, they should talk to their: manager, human resources (HR) department, trade union representative.”

Standing up to the bully is not necessarily the strongest advice but there are ways a victim can protect themselves and steps they can take to stop disrespectful behaviour. Above all, the best approach is to stay calm, stick to the facts when communicating, and try not to get drawn into arguments.

Only speak to the perpetrator if you feel SAFE. There could be a miscommunication. The perpetrator might have no idea their words or actions have had such a negative impact on you.

If the thought of speaking to the other person fills you with dread, DON’T. Talk to a trusted colleague. Find out about your company’s policies around discrimination, victimisation, and harassment.

If it’s an ongoing problem, you can also keep a journal to record the date, time, and location of incidents, as well as details of what happened, what was said, and whether anyone else witnessed it. Remember to include how you felt at the time and the way it affected you.

Most of all though, talk to someone. Don’t be alone with the problem. 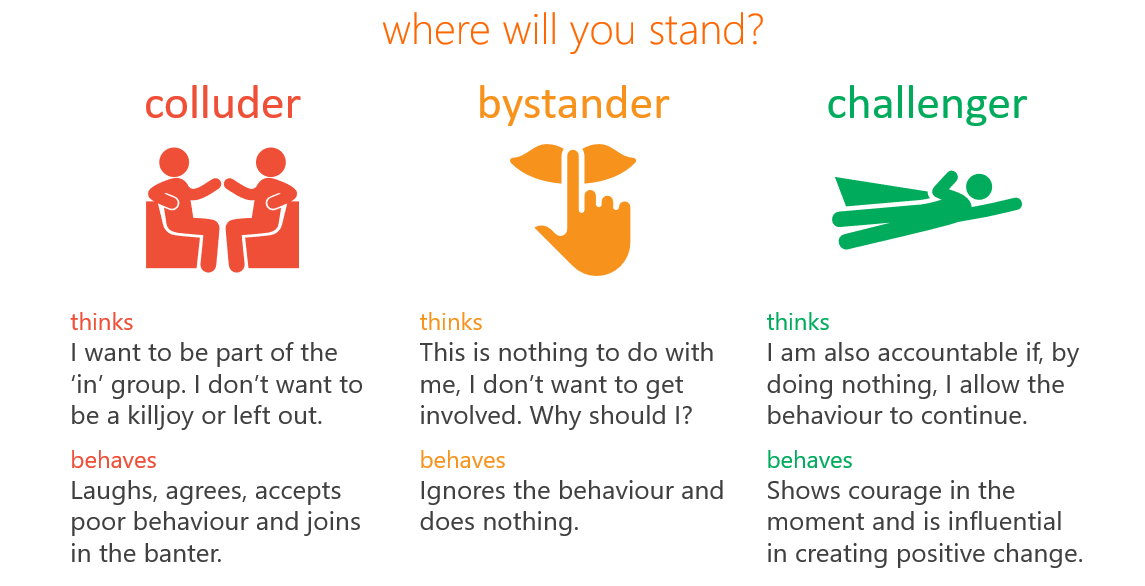 If you see everyday incivility, microaggressions, bullying or harassment at work you can do something.

Even if you don’t intervene at the time, you don’t have to turn a blind eye. You can choose what you want to be: a colluder, bystander, or challenger.

Whether you talk to the perpetrator at the time, or choose a later time, you can use our FIX feedback model to tell them about what you experienced:

Facts. Stick to them. When, where, and what did you see or hear happen? What was the behaviour? Try not to make assumptions or subjective judgments.

eXpectation of change. What difference might you hope to see in the future.

This links back to the 3 worlds. The bystander can, if they choose (and feel able to), take the role of the ‘impartial viewer’ in presenting the facts of what they witnessed and its impact on them. They become a ‘challenger’ because they present an alternative perspective on the situation they witnessed.

Christine Porath and Christine Pearson, The Price of Incivility

Christine Porath, Why being respectful to your co-workers is good for business, TED Talk

ThoughtCo, What Is a Microaggression? Everyday Insults With Harmful Effects

Ella F. Washington, Alison Hall Birch, and Laura Morgan Roberts, When and How to Respond to Microaggressions

Ella F. Washington, Recognizing and Responding to Microaggressions at Work

Ruchika Tulshyan, We Need to Retire the Term “Microaggressions”

Siobhan Palmer, When is ‘just banter’ not just banter?

Citizens Advice, If you’re being harassed or bullied at work (UK)

National Bullying Helpline, Information and advice for anyone dealing with bullying (UK)